Back In ActionNewsBlogGame Day Nutrition 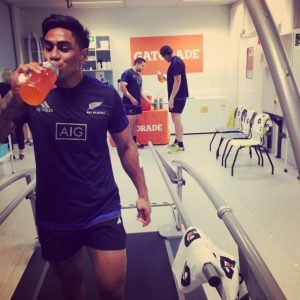 So the All blacks are telling you to drink PowerAde, and just about to start telling you to drink Gatorade, Betty White’s saying you aren’t you unless you have a snickers in your hand, and we have the Highlanders making a bucket of chicken look like the most fun you have ever had with your mates. On the other hand George Foreman is knocking out the fat, everyone is telling you sugar is the worst thing in the world, and that all you are allowed to eat is what you have grown in your own garden. I’m not going to get into your day to day nutrition, but what I would like to do is talk a bit about nutrition for game day, and some basics around GI and the role nutrition has on injury prevention. So if you want to give your body that extra few percent, keep your energy up and your mind sharp when you are out there competing, have a read.

Keeping your blood glucose (sugar) levels up is important, especially due to the way that energy systems in muscles work. The energy that goes into muscles, occurs in the lengthening portion of muscle movement, the eccentric phase it is called. It is like pulling a spring long ways, getting it ready to release for when your brain sends a signal down to the muscle. Essentially, energy goes in, the muscle lengthens, and it’s ready for the next message your brain sends to shorten (contract) again. Running out of energy is partly why muscles get tighter as the game or sport goes, so we can break this down to tired muscle = tight muscle = that strained calf. For anyone that has ever had a strain of the hamstrings or calf, I would ask, did it happen early or late in the game, did you eat well before the game, and did you warm up well. Hamstrings in particular are required to rapidly lengthen when you see that gap that you are suddenly trying to go for, when you are off balance and have to bring your foot all the way forward to catch yourself, or where you have been set up perfectly for that volley and all you need to do is belt that ball into the top right corner, in the last minute, of the final, in your social soccer game, to set yourself up for a lifetime of stories of your heroics.

In my own experience game day can often be a nerve racking time, whether that’s from excitement, fear, or the pressure of needing to perform, pushing your appetite down your priority list. However, in order to perform at your best, and also help prevent injury, ideally, 2-3 hours out from sport, you want to be getting a good amount of energy in whatever form you can. Some people like a hearty breakfast, a bowl of porridge, others a few bananas, and some struggle to get anything in at all. For those people in particular, a great way to get in something in is a smoothie. A few bananas, some berry’s, a bit of yogurt,  throw in some honey while you’re at it, I often put in a sachet of quick oats too, attack that with your nutribullet/ninja, whiz stick, blender, chuck it in a bottle, and work away at it in that 2-3 hour pre-match period.

Now I don’t want to sound like an advertisement, unless Coca-Cola want to send me some sponsorship money, but sports drinks like your Powerade’s, Gatorade’s, etc. can be great as part of your pre-match warm up and also for half time, when the legs are starting to lose their zip. These types of drinks contain sugar for energy but also electrolytes, mainly sodium and potassium, which help to keep the fluid in your body in the right balance. As you sweat in a game, you are losing both water and electrolytes, hence why sweat is salty, this is why replacing this with drinks that contain electrolytes keep you better hydrated than just drinking water.

I know sugar has been taking a hammering as of late, and rightly so, but there are times where if used right can be effective in ensuring a good performance. Similarly white bread has been put on the naughty list, as essentially when it breaks down in your stomach, it pretty much turns straight into sugar. Foods which are high in sugar, or are very refined or processed are very easily broken, hence you get a very quick blast of energy from them, but that energy is soon gone. The speed in which different foods are broken down are quantified in the glycaemic index, or GI which is often found on the packaging, and gives an indication of how quickly something is broken down in the body and converted into the glucose that enters your blood, and provides energy to your muscles. High GI foods, quickly convert to sugar in the bloodstream, Low GI foods take longer to deliver sugar to the blood stream. It is comparable to filling your log burner up with small bits of pine. Your fireplace is going to throw out a huge amount of heat, but very soon need more, where putting in a large piece of something dense, like kanuka, will just sit there and burn at a lower intensity, but for longer. Fats are similar in the slow burning way of energy delivery. With this in mind, as we are trying to get that burst of energy, something higher in GI can be useful. I myself am partial to the odd snickers as part of my pregame intake, or a bumper bar, but that’s maybe just me being a sweet tooth.

The end of a game is also a time where nutrition is important in how your body pulls up. I was once told by a dietitian I had worked with that chocolate milk is ideal. It contains sugar to replace what has just been used up, protein for muscle repair, and fat also, which is an important slow burning energy source, so I am often seen with a chocolate milk mustache at the end of each rugby game.

Anyone with a condition which may be affected by a sudden increase in sugar, or a dip, should seek medical advice in the management of their blood sugar levels and nutrition. For any specific requirements you may have, you may need to seek specialist input from a dietitian, or a medical professional.

I hope that helps people out there with refining their pre-match ritual, and by all means, get out there and do your own research as well.

Good Luck out there this weekend, evening, afternoon in your physical endeavours!